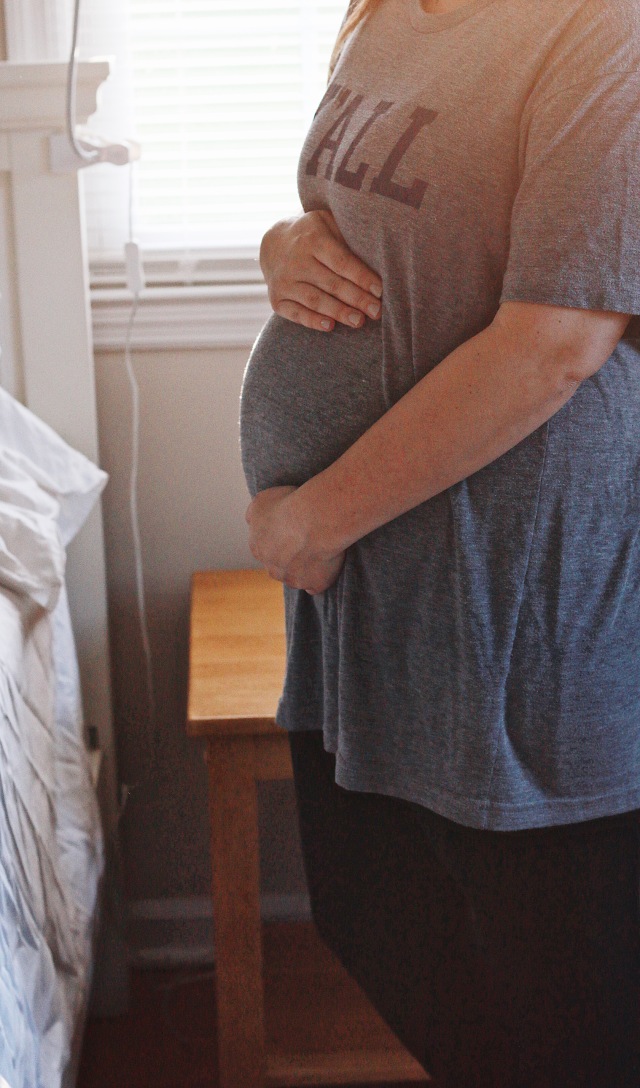 When we found out I was pregnant at the end of January, more than one emotion flashed through my heart. First and probably the longest lasting was a feeling of unbelief. We weren’t trying to have a baby. We were barely touching the surface of even the idea of starting a family. I wish I could say that the emotions following were of glee and merriment, but honestly they weren’t. I was terrified, angry, worried, and confused. Why now? Why not in my time? So many questions swirled into a snowball of anxiety and the large, cold, burning lump swelled in my throat. After nearly five pregnancy tests, two lines continued to show up and reality began to set in that despite all odds, I was pregnant. And in that moment, our entire lives changed forever.

I know you’re probably worrying or thinking I’m some horrible mom-to-be, and believe me, I know where you’re coming from. Particularly in Christian circles, not being over the top thrilled about being pregnant seems to be the sin of all sins, and I felt and still feel the guilt of that at times. It wouldn’t be until weeks later, at our first ultrasound, that a small, yet strong sense of eagerness began to creep up the center of my soul. After seeing the black and white image on the screen, that despite the fact looked only like a round sack, I knew there was a fighter in there. One who showed up at both the worst and best moment. One that was all ours.

As I look back at those early weeks of being pregnant, I remember fear the most. I continued to justify my fear with thoughts like, “Every woman who gets pregnant is scared.” or “You’ve never done this before, so of course it’s scary!”… but my experience seemed different than those justifications. It seemed deeper than a common first pregnancy fear. If you’ve known me for any amount of time, you know that having children was the last thing on my to-do list for most of my life. It wasn’t until I married Spencer that I began to see that I could be a mom, and even that was mostly because I knew he would be such a great dad. So to say this took me by surprise is an understatement.

I remember asking myself why wasn’t I excited? What was I so afraid of? I remember beating myself up over not being like the other women in my life having babies who seem so strong, fearless, and prepared. I cried out to God so many times with helpless prayers, begging for answers that I knew were already inside of me, although it took a scare and a last minute ultrasound to finally get it. When we saw that our baby was still there, still holding on, despite the pain and blood I had suffered that previous weekend, I knew my answer. I wanted this baby, and I wanted to be a mom, more than I could express in words. I was afraid and willing to let my fear steal my faith because I have never wanted something so badly.

Nearly 20 weeks have gone by and so much has changed from that frail moment at the end of January. We’ve moved cities, churches, bought our first home, and started a new job. Our marriage has changed, as it always does, and we’ve wrestled through the transitions that come with being pregnant. It hasn’t been easy. Somedays I can’t fathom getting out of bed and others I can’t stay asleep past 5:00am. Every day is different. And every day requires flexibility. And you know, through this whole thing I think that’s what God is teaching me.

To be flexible.
To let go of plans, control, and expectations.
To relinquish what I want for what He wants.
To trust Him.
To pursue grace over guilt.

A wise friend told me recently to only look and listen within. She understood my struggle to compare myself to other pregnant friends or moms. She encouraged me to stay within myself and trust that God has already given me exactly what my child will need, much like He has given every other momma. She told me to listen within my soul for the Spirit’s leading and to give attention to my emotions and feelings. And although I am so big on the importance of validating others’ emotions, I realized in that conversation that I hadn’t been validating my own. And the result rolled into one ball of anxiety, fear, doubt, and guilt.

I’ll be honest. I’ve been working on this post for several weeks now – probably longer than I worked on any paper in graduate school. And although its content and writing is anything but extraordinary, I needed this post to be real. This blog is more of a journal for me, and every so often I read posts written long ago to see not only how far I’ve come, but how far He has brought me. I want to remember the raw, real emotions that came with my first pregnancy. I want to know that despite what social media tells me, it’s okay to be unfiltered and unedited. I don’t have to have an emoji for every sentence or a hashtag for every thought. I can be me (flawed, unexcited, scared, anxious), even when I’m pregnant.

So, I guess my purpose in writing this, much like everything else I write, is to flesh out the life happening before my eyes with hopes that maybe you’ve been here too and are on the other side now. Maybe you struggle with not feeling the way you’re supposed to feel. Maybe you feel undeserving of a healthy pregnancy when many of your friends’ end in miscarriage. I’m there with you. This journey through life, filled with babies or not, is a journey of learning. And I intend to spend whatever precious time I have with this baby in my tummy learning to be a momma who loves and forgives… starting with myself.

We will welcome a sweet and sure to be wild miracle this October, and we aren’t the least bit mad that her due date is near a very important Kentucky football game.

5 Responses to Pregnant and Guilty.