“…to pursue it (the future) is to purse a constantly retreating phantom, and the faster you chase it, the faster it runs ahead.” 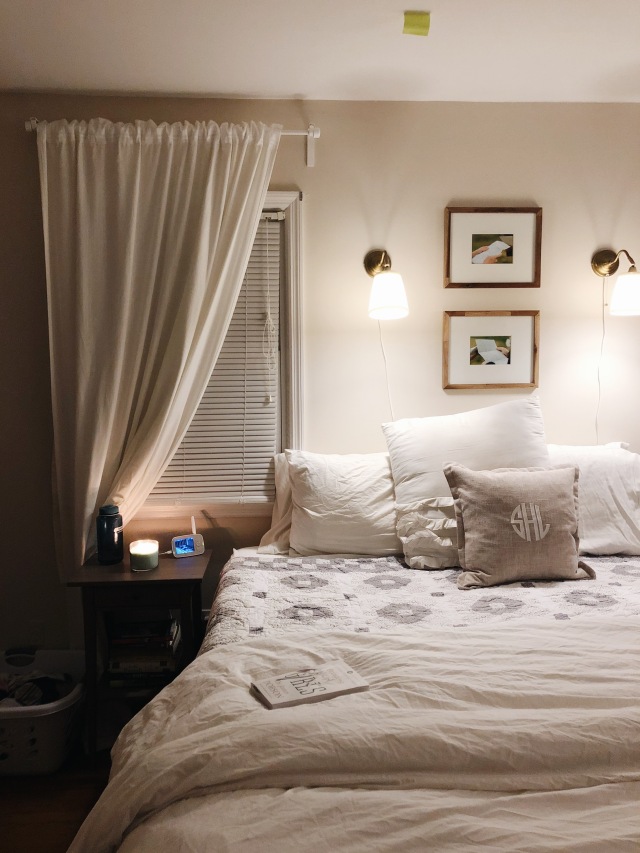 If you, like the rest of the Instagram world, are participating in the infamous @mamawatters Rest Retreat, then you read the article that this quote came from. And you completely understand the title of this post. If you are too cool to jump on the bandwagon of no social media for the month of January then you should know that Amanda Watters of Homesong has put together a retreat if you will of time away from social media to really begin the new year in a more present way. Since having Campbell, I have become a social media nut job.

I mean, how can I resist posting obnoxiously when my kid looks like this?

However, I realized when I was keeping my daughter up past her nap time and laying her on the floor in weird places of our house (because, you know, lighting), that I had a problem and that problem needed to be evaluated. Low and behold, Amanda (or Mama Watters as I affectionately call her when talking to my husband) presented a great way to get my social media obsession under control with taking the first month of the year away from those apps and into more reflective, productive, and present ways to spend my time. I’m only three days in at this point and boy, does it feel good.

Except for the fact that I didn’t know Joanna Gaines was pregnant again. Because I missed the announcement on Instagram. Yeah, that doesn’t feel good. Not. One. Bit.

While reading through the preparation material for the Rest Retreat, the quote above really struck me. I don’t do New Years Resolutions because honestly, I think they’re dumb. The motivation that comes at the strike of midnight of a new year only lasts a millisecond and then we are all back to the same routines and bad habits that we indulged in only hours before. I think it takes more than the flip of a calendar to change the hearts and minds of people. And frankly, I’ve been let down too many times by resolutions I swore would make me happier so I’ve resolved to stick with the person I am and make slow movements toward the person I want to be…nothing fast and drastic. Just simple changes in the choices I make and the things I buy and the activities I participate in.

I do hope to stop pursuing the future in 2018… even if just a little bit. A constantly retreating phantom–that is the future. Something that seems in reach yet proves to be a million miles away every time. A desire for better. Better than what we have now. Better than who we are now. Better than how we feel now. The future, as it seems by how we view it, must hold something better for us (regardless of what that something is), and we won’t be satisfied, settled, or sure until we’ve reached “the better”. Yet, when we arrive, the better is never better. The better is often a let down. And the next “better” lies ahead in the future, just waiting for us to catch up and hold onto it–a completely impossible feat.

This desire for the future manifests itself in several ways for me currently. When my house is decluttered, organized, cleaned, and designed exactly the way I envision it in my head, then I will be satisfied with living here. Key word here is then. When Campbell can crawl and say words and eat solid foods, then motherhood will be more fun. Again, then. When Spencer gets a raise or when we pay off our debt, then we won’t argue over finances. When we have another baby, then I’ll feel okay with how my body looks now. I could go on.

The point I believe the quote is trying to make, and one that I need to sink deep into my soul, is that there is not then. There is only NOW. Looking toward the future, chasing whatever it is that we think is out there for us, waiting for the moment when everything is complete, just isn’t reality. It’s also not the point of this one crazy life we’ve been given. Wishing away the present doesn’t make the future arrive any faster, and it doesn’t make the future any better. So often I look back on a time in life that seemed so daunting, so hard, and I say wow–I miss those days. Because to the human heart and mind, the grass is always greener on the other side…and even on the side you’ve already been. But in reality, the grass isn’t any greener on the other side or on the side you’re currently standing in. There’s that cheesy Pinterest quote that says something like the grass is green where you water it, and I’d say that’s pretty true. Anxiety and frustration are born out of the unknown. And with the future being the ultimate unknown, no wonder we are an anxious and frustrated group of people! We’re pursuing the one thing we can’t attain, all while life is passing by without notice.

I can’t believe that I have been married for over two years and now have a nearly three month old. Like, as I type those words out, tears come to my eyes with how fast it’s all gone. This August I will celebrate my 26 birthday. I will be 4 years out from when I graduated college. 8 years since high school. I never knew my life would look the way it does, not even three years ago. But here I am, and honestly, I have no idea how I’ve gotten here. I’ve spent the majority of my 26 years moving through school, boyfriends, jobs, and moves so quickly, rushing the next season of life that I can’t even remember a lot of it. Time is flying and I’m tired of wishing it all away for something “better” when I’ve got RIGHT NOW. Right now is better than it will ever be and this year I hope to be more present and pay more attention, and especially stop chasing a phantom that will never be caught.

3 Responses to Chasing a phantom.